The most romantic Portuguese love story

Long before there were Romeo and Juliet, there were Inês de Castro and King Peter of Portugal. Some even believe that their love could have been Shakespeare inspiration for writing the most famous love story of all time. We dare you not to cry with the most romantic (and tragic) Portuguese love story. 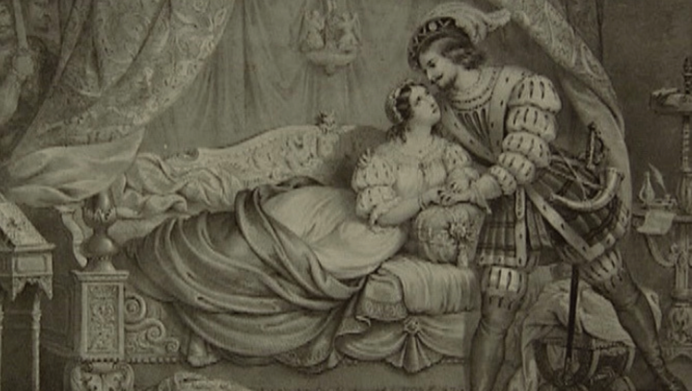 This love story took place in the 14th century. Peter was the son of King D. Afonso V and the heir to the throne. Afonso V decided that his son should marry Constance, a member of the Castilian nobility, for political reasons. When she arrived to Portugal for her wedding, the bride was accompanied by her ladies-in-waiting. Among them was the Galician Inês de Castro, Constance’s close friend.

The Inês de Castro’s great beauty amazed the entire Court and the young future king was no exception. Not immune to the charms of the young maiden, the prince did everything to get to know her in secret. The two fell madly in love. Although his heart belonged to Inês, Peter had to marry Constance by his father’s command.

Constance died giving birth, leaving Peter widowed. After her death, the crown’s heir felt free to live his romance and marry Inês, but the King never allowed it. However, it is said that the couple, against the king’s orders, secretly married and that Inês was Peter’s lawful wife. The two lived together in Coimbra and had several children. For some years, they had a happy life as a family, far from the eyes of the court and the king.

Although Peter believed that in Coimbra his family was safe, the king and the court never forgot the problem that Inês de Castro represented. The influence that Inês de Castro’s brothers appeared to have in Peter and the danger of the bastard children taking the place of the legitimate heir, son of Peter and the deceased Constance, started to frighten the King. This love was seen as a threat to the future and independence of Portugal from Spain.

While the young couple were living their love in the gardens of Coimbra, far from them, their destiny was being shaped in the most cruel way.

Succumbing to the pressure, the king ordered Inês’s death, a order that lead to one of the most terrifying episodes of the entire Portuguese history. When Peter was away, a group of men caught the helpless Inês and murdered her in cold blood. It is said that she was stabbed in front of her children, begging the King and her killers for mercy.

Legend has it that in Quinta das Lágrimas in Coimbra, where Inês was killed, the red spots we now see in the Lágrimas (Portuguese for tears) Fountain, are the stains of her blood.

A love stronger than death

Inês’s death left Peter completely devastated and furious. It’s said that he was willing to start a war with his father but his mother pleaded for peace. Although he promised not to persecute the men responsible for Inês’s death, as soon as his father died and Peter was named King, he arrested the killers.

Peter’s anger was wild and his only wish in life was to have revenge for his lover’s death. The assassins were caught and tortured. Peter inflicted them a macabre death by ripping their hearts out of their chest and back. Legend has it that he did it with this bare hands. This action earned him the title of “the Cruel”.

In the most macabre twist of the Portuguese history, Peter named the deceased Inês as the Queen of Portugal, a gesture considered by many one of the greatest proofs of love of all time.

It’s said that Peter exhumed his lover’s body, dressed it in the finest clothes, put her in the throne, crowned her and made all the nobles, that were once against their love, kiss Inês’s hand and recognize her as their true queen.

Together in the eternity

Inês was initially buried in Coimbra. However, Peter ordered that a tomb worthy of Inês’s royalty was built. Peter’s tomb would later join her, so that they could rest together forever.

The two lovers were buried in Alcobaça Monastery, worthy of receiving the King and Queen’s remains. Considered by many as the most beautiful tombs in Portugal and a splendid masterpiece of gothic style, they seem perfect for a romance that resembles so much a gothic novel.

Their tombs showcase realist representations of the couple and are facing each other, so that when the day of the Last Judgment comes, the two lovers will quickly see each other.

If you ever have the change to visit Portugal, you can come walk the path of Peter and Inês’s love story. You can go to Coimbra and visit the gardens of Quinta das Lágrimas, or go to Alcobaça  and see how the most romantic Portuguese love story was immortalized in stone.