5 Medieval Castles You Should Know About

Portugal is one of the oldest countries in the world. While Ethiopia or Greece have histories that go back way further, Portugal is identifiable as a singular nation-state since 1139. That’s almost one thousand years of history and culture. 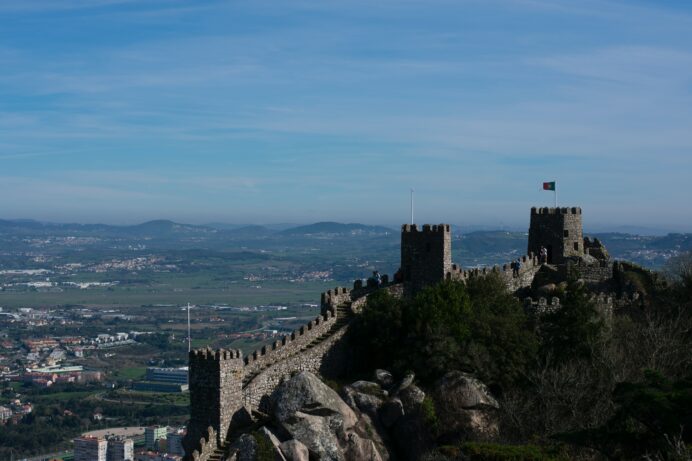 That history begins in the high middle ages when Christian kings from the North of the Iberian Peninsula set about reconquering it from the Caliphate of Cordoba and its taifas (smaller splinter states). Naturally, defensive fortifications were built along the way, to ensure that the territory couldn’t be lost.

Today these medieval castles are is beautiful reminders of our shared past, and some of the most gorgeous tourist attractions anywhere in the world. Amalia Home Collection also has a long history and love of Portuguese culture, so we want to share 5 medieval castles you should know about and visit when traveling in Portugal.

1. The Castle of Montalegre

Montalegre is at the northernmost reach of Portugal, almost on the border with Spain. The Castle of Montalegre was built during the 13th century by King Afonso III as a safeguard against the insistent attempts by Spanish rulers to take Portugal back.

The castle sits on a lovely granite hill, surrounded by nature. This natural beauty is one of the biggest draws of Montalegre. Right on the edge of the Gerês Natural Park, you can use your time to explore both the history and the natural wonders of the region.

This castle actually predates Portugal as a sort of military keep in this location since at least 868. The castle of Santa Maria da Feira was actually one of the main stalwarts that supported Portuguese independence in 1128 when that struggle began and has been acknowledged as a national monument since at least 1881.

With 2020 being an exception for obvious reasons, the castle hosts the largest medieval fair and reenactment event in Europe. For weeks every summer, the fair that gave the town its name (feira means fair in Portuguese) is recreated with exceptional detail and aplomb.

One of the most unique castles in Europe, the Castle of Almourol is only accessible by boat! Built on a very small rocky island in the middle of the Tagus river for natural protection against invaders, it clearly didn’t always work as it was originally built by Muslim settlers and taken back by Portuguese forces. It was given to the Templar Order in 1171 by the first king of Portugal, and they rebuilt it to its current form.

Almourol is exceptionally close to Tomar, which is the Portuguese town with the strongest link to the Templar Knights. If you go, make sure to visit the Convent of Christ, which is an absolute gem as well as the place where you can see the Janela Manuelina, possibly the most famous icon of Portugal’s native architectural style.

The Castle of St. Jorge is one of Lisbon’s most remarkable monuments. Built by Muslim settlers, similar to Almourol, it has been rebuilt and repurposed several times in its role as the premier defensive structure of the city of Lisbon. When the defense was no longer a concern anymore the intention became to glorify Portuguese history.

And this is why today, it represents a true example of Portuguese medieval military architecture in pristine condition. It is a site that is unmissable. As a bonus, make sure to bring your camera. The view from the castle is possibly the best view you will ever get from a European capital as you can see the city almost in its entirety.

5.   The Castle of Guimarães

Guimarães is known as the “cradle” of Portugal since it was from here, at this castle, that Portugal’s first king, Afonso Henriques, launched the campaign for independence. Amalia Home Collection hails from Guimarães, so we may be biased, but we really had to leave this one for last. It also helps that it is visually striking since it is the picture-perfect image of what you would expect a medieval castle to be.

In fact, the whole town is in a remarkable state of conservation, and there are quite a few medieval monuments that are not only still standing but still being used. The Church of Nossa Senhora da Oliveira, for instance, that was built in the 14th century, is still working as a church to this day.

Since 1922, the Amalia Home Collection has been developing and producing luxurious and artistic home textiles, made in Portugal, and inspired by the Portuguese culture and its beautiful landscapes. From the coastline to the countryside, from the cobblestone streets to the rolling hills, from the rooms of a beautiful palace to the Atlantic ocean’s deep blue, each design brings a little piece of Portugal to your home.

We are immensely proud of this history and heritage, and it informs every thread of our designs. So if you enjoyed this article, make sure to check out our webstore. In our products, we carry the heart and soul of this nation, and we make sure to honor this legacy with the highest standards. 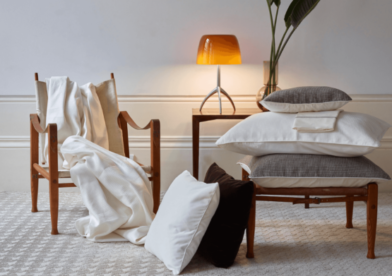 Inspiration
The Makings of Portuguese Azulejo
19 June 2020 ● 3 minutes
As one of the key aspects of Portuguese cultural identity, Amalia Home Collection tries to bring the aesthetic sensibility of our forebears to every product. There is a distinctive Portuguese…
Read More