Manuelino is the style that marks the Portuguese artistic and architectural shift away from the late Gothic during the reign of King Manuel I, between 1469 and 1521. Manuelino architecture is a vivid ornamental reflection in Portuguese architecture from a great era for Portugal. Continue to read to learn more. 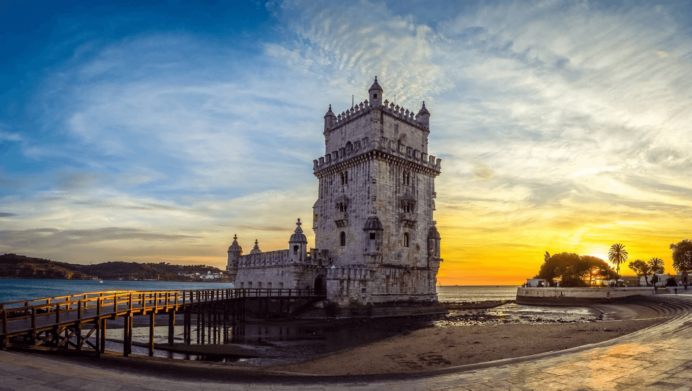 Manuelino is a particularly rich and lavish Portuguese style of architectural of the early 16th century, created in order to celebrate the prosperity of the reign of King Manuel I. Those were the days of the great sea expeditions and meetings with new cultures.

Many believe that Manuelino style is Portuguese architecture in its purest and most unique form.

Inspired by the Portuguese Discoveries

The style was much influenced by the astonishing successes of the voyages of discovery of Portuguese navigators. Its inspirations comes all the way from the coastal areas of Africa to the discovery of Brazil and the ocean routes to the Far East. This style is also drawing heavily on the style and decorations of East Indian temples.

Portuguese wealth was dependent upon sea trade, and the vocabulary of Manueline decoration is decidedly nautical. When not made to resemble coral itself, moldings were encrusted with carved barnacles or covered with carved seaweed and algae. Stone ropes and cables form architectural string courses, and above the windows and doors heraldic shields, crosses, anchors, navigational instruments, and buoys are massed together in profusion. Contemporary ship accoutrements were turned into architectural motifs.

Some of the most famous examples of this architecture style are Jerónimos Monastery and the Tower of Belem, both in Lisbon.

A touch of mystery

The Manuelino style of decoration is also well portrayed in the mysterious astrological visions of the famous window of the Convent of Christ in Tomar, a bastion of the Templars in the past.

This window is also known as the Capitulum Window. Sided by two gigantic buttresses, or botaréus, this window is ornamented by an exuberant figurative universe, filled with maritime themes – the wood, the ropes, the buoys, etc – the Order insignia – the heraldic cross, the armillary sphere, the kingdom´s coat of arms – and symbolic figures associated to the mystique of the Spiritual Cavalry and to the role the Order of Christ played in the enterprise of the Discoveries.

A mix of elements

The numerous forms related to the sea and intrepid voyages across the oceans to other continents, mixing elements of Christianity with shells, ropes or fantastic and strange aquatic shapes.

There are examples of this style in many monuments throughout the country, as well as the Atlantic islands of Madeira and the Azores, while it is sometimes combined in the famous tile panels, as can be seen at the National Palace of Sintra.

Without touching the classic structures of the period, this style aims to ennoble them by giving a fresh look. If you have the chance to visit Portugal, go to this unique monuments and be mesmerized by the beauty of this architectural style.

SEE ALSO: The meaning of “Saudade” the most Portuguese word