Getting Out of Lisbon Part 2: Sintra

Lisbon is a gorgeous city that you could spend months exploring. Nevertheless, Portugal has so much to offer, and there are so many truly gorgeous sights to explore that we had be remiss if we didn’t discuss some of the loveliest alternatives, especially when some are just a day trip away. 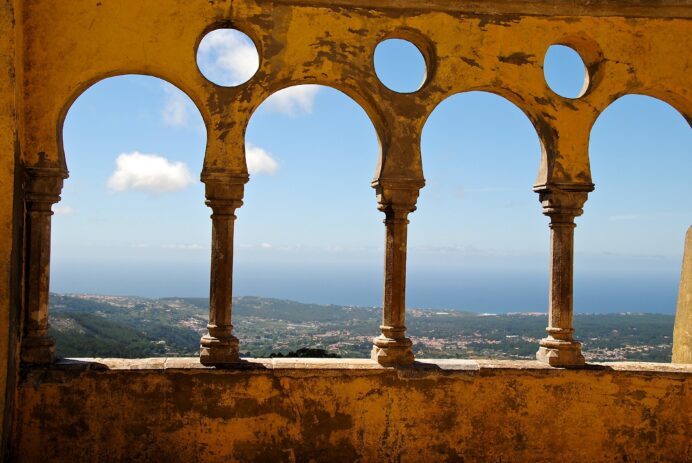 If you haven’t had the chance to read the first installment of this series, about Queluz, you definitely should start there. Our second recommendation is the gorgeous town of Sintra.

Much like Queluz, Sintra sits just outside of Lisbon and is easily accessible by train on the very same line. You can catch a direct train to Sintra from pretty much every Comboios de Portugal station in Lisbon.

We have selected three of the most unmissable attractions in Sintra, but once you get there, be sure to spend some time walking around the narrow streets and enjoying the town itself. Thanks to its micro-climate, even the weather makes it a great joy to visit its parks and back alleys.

Regaleira Farm is one of the most unique tourist attractions in Portugal. Built by Carvalho Monteiro, a wealthy merchant from Porto who made his fortunes trading with Brazil, the four-hectare estate became a personal project. Aside from the palace and the chapel, that is stunning, and boast an eclectic architectural mix, you will be able to find many secretive and quirky constructions in the property and the park.

Carvalho Monteiro held enigmatic beliefs, and there are symbols related to everything from the Knights Templar to freemasonry everywhere on the property. He built a myriad of tunnels and even a series of Initiation Wells that are effectively inverted towers. It is a fascinating place with an extraordinary history!

The Palace of Pena is one of the most iconic buildings in Southern Europe as it has frequently been seen in tourist advertisements. Its unusual and intensely colorful exterior has everything to do with its complicated history. There has been a building on its site since the Middle Ages and parts of what was originally a monastery have been restored and can still be visited.

These extremely ancient elements are now integrated into a complex, parts of which were built as late as the 19th century. This is what makes the Palace so unique. It has elements of different periods and aesthetic sensibilities. Furthermore, it is right at the top of the Pena Park, which was artificially created with the same Romantic taste. Plants and trees were imported from everywhere in the world even including American Sequoias.

3.   Castelo dos Mouros or Castle of the Moors

The Castle of the Moors sits atop the hill right next to the Palace of Pena and you can take a small bus from one to the other, making it very easy to visit both. The name is indicative of what you will find. It was built during the period of Muslim Iberia between the 8th and 9th centuries and to this day, most of it is quite intact. On a clear day, you can get a stunning view that encompasses all of Sintra and even Mafra and Ericeira. When you visit, make sure to check out the chapel, which was built after the castle voluntarily surrendered to Christian forces during the Reconquista.

It goes without saying that our Portuguese heritage and culture inform much of Amalia Home Collection’s design choices and the eclectic nature of a place like Sintra, which has such a vibrant and dazzling mixture of colors and sensibilities is one of the reasons why.

Our Flor Do Monte range of products matches a delicate floral digital print with plain European stonewashed linen for a luxurious finish and delicate touch. Much like the parks in Sintra, that combine the soothing feel of nature with the technique and craft of human creations, these bed linens will leave an everlasting impression. Shop our collection online!