Jacquard Fabrics: The History and How They Came to Be

Have you ever wondered what is the difference between jacquard fabrics and all other fabrics? Have you ever touched the embroidery and marveled at the incredibly precise patterns? Every jacquard fabric seems to have been taken directly from the French court of Louis XIV! 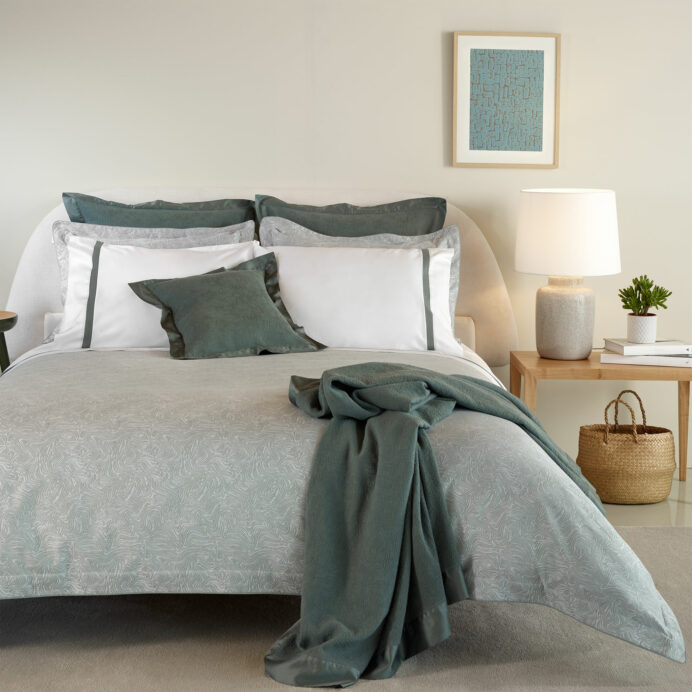 Jacquard fabrics are embroidered with the same kind of lush and creative patterns that were appreciated by wealthy French nobles of the 18th century, including the Sun King himself. At the time, however, they were truly ostentatious, expensive, and had to be crafted by hand.

Before the Loom, There Were Artisans

Joseph Marie Jacquard, the person behind the namesake of the fabric, was born in Lyon in 1753 only a few years after Louis XIV’s death. His father, Jean Charles, was a master weaver. He owned a workshop and several looms and put his son to work for him from an early age. However, Joseph wasn’t too adept at it; it was hard work as each beautiful intricate pattern had to be created by hand making for truly backbreaking labor.

Therefore, his father sent him away to work with his brother, who owned a printing press. Joseph was put in charge of bookbinding and creating printing types. He was influenced by the movable types, and how they made printing so much easier and faster.

The Invention of the Jacquard Loom

What would become known as the Jacquard loom didn’t come to him right away. He created a treadle loom first, and even a loom to weave fishing nets, but none of these early inventions would be a success.

It was only when Jacquard figured out he could use pasteboard cards to instruct mechanical looms to create patterns automatically that things truly changed. It took him five years of experimenting and perfecting before his invention became public property and he was awarded a pension.

But 5 years was nothing compared to the way he changed the world of textiles forever.

The jacquard mechanical loom uses pasteboard cards with holes punched in them to teach a mechanical loom what threads to alternate and when to do so. This ensures that the machine creates consistently perfect patterns without fail, regardless of how complicated they may seem. This was an incredible boon for the French textiles industry, which was competing at the time with the rapidly industrialized British equivalent.

Napoleon himself visited Lyon and awarded the city with the patent in 1805, solidifying Jacquard and his invention for life.

Technology has evolved, so naturally, pasteboard cards are no longer used to program the looms, but the process in and of itself is still remarkably similar. The loom is, of course, computer programmed, and the machines are electronic, but these are refinements, more than radical changes.

The brocade fabrics produced in this way are still called jacquard fabrics as an homage to the great inventor that introduced what is still considered today to be the first programmable machine.

The Loom’s Influence on Computing

Even now, jacquard looms are to be the first programmable machines ever invented. Charles Babbage, the creator of the world’s first computer was familiar with these looms, and Jacquard’s revolutionary idea to create punch cards with instructions that would prove instrumental for the creation of his designs. In fact, the basic logic of Jacquard’s language is also thought to be the origin of binary code systems.

At Amalia Home Collection, we value our heritage which encompasses the history of our country, our region, and also that of our craft. Our jacquard fabrics are made with the finest raw materials and the most advanced techniques. Check them out along with the rest of our bedding collection.