8 Amazing Castles To Visit In Portugal

European landscapes always tell unique stories – and Portugal is no exception. Either on hills or mountains, along plains and rivers and in towns or cities, this is a country with hundreds of remarkable fortifications. So, wherever you are, you will be soaked in ancient history, architecture, and culture. 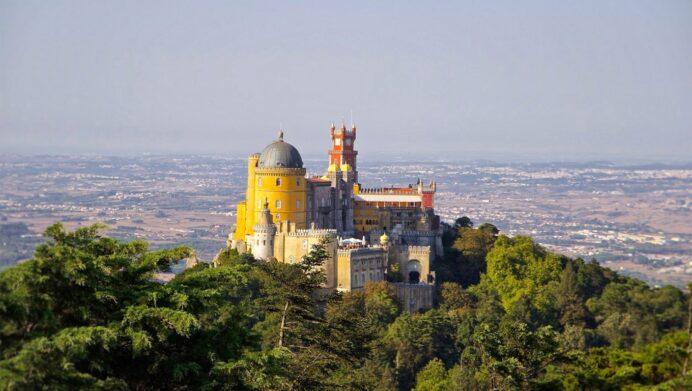 While Germany is typically thought of as a country of castles, Portugal’s rich past lends itself well to castle hopping and spectacular landmarks to explore on your next trip. From north to south, we have picked some of the most beautiful castles for you to visit.

While there are so many to explore, here are 8 of the most impressive castles and fortresses around Portugal. Add these architectural wonders to your bucket list and start planning your route around our beautiful country:

A symbol of Portugal’s foundation, this castle was built almost 1,000 years ago in the city of Guimarães. It is commonly said that it was there where Afonso Henriques – Portugal’s first king – was born.

Guimarães was the country’s first capital and today it is celebrated as the birthplace of the nation. With such national significance, the town was declared a World Heritage Site by UNESCO in 2001. The country’s deep roots run through this castle, making it a fascinating spot to visit in Portugal.

The Castle of Santa Maria da Feira reflects the diversity that took place in the region between the 11th and 16th centuries. Throughout its grounds, there are numerous signs dedicated to important events that occurred during this time and on these grounds.

Today, it is one of the best-preserved castles in Portugal and in our opinion is one that it leaves a lasting impression on you.

Situated on an islet in the middle of the Tagus River, Almourol Castle is one of the most emblematic (and enigmatic!) monuments of the Christian reconquest. It is best seen from the opposite side of the river – and best seen at sunset.

There are several legends about this picturesque castle, including one that says it’s haunted by a princess. Its foundations are Celtic and Roman, and it is also heavily influenced by the Knights Templar, who rebuilt the castle after its destruction almost a thousand years ago. Learn all its secrets when you visit this enchanting place.

Built in the late 13th century as a frontier fortress over Moorish foundations, this well-preserved castle is placed on a site of incomparable natural beauty.

Visiting the castle requires a long, winding drive to the top of a granite escarpment where the Marvão mountain sits 861 meters (over 2800 feet!)  above sea level. The parish of Alter do Chão is relatively close and has another castle that shares the same name.

The Fort of São João Baptista was built circa 1502 from the remains of a pre-existing but abandoned monastery. Once you are there, be sure to also visit its idyllic surrounds, such as the caves, grottos and extensive marine life around the islands.

Although it is not considered a castle since it was never a monarchical residence, this military fortification is definitely worth visiting. Situated on the Berlengas Islands, the fort is one of the most visually striking buildings in Portugal.

6. Castle of the Moors

Based in Sintra, this medieval castle dates to the Moorish occupation of Portugal. Located on one of the hilltops of the Serra de Sintra, it played an integral role in Portugal’s road to independence. One of the main turning points in the European’s efforts to remove the ruling North African Moors from the continent was in fact taken by Portuguese King Afonso Henriques, setting Portugal on the road to its own independent history throughout the next near millennia.

The fortress is impossible to miss from every angle of the charming town of Sintra, which is also one of the UNESCO World Heritage sites to see in Portugal. This glorious castle is just a short walk from Pena Palace, so, visits should ideally be tied together.

One should not travel to Portugal without visiting Pena Palace at least once! Located in the highest hill above the town of Sintra, Pena Palace is one of the most popular Portuguese castles. Although it sure sounds like a “palace”, it is, in fact, a Romanticist castle recognized by UNESCO.

The roots of Pena Palace date back to the Middle Ages when a chapel was established. It eventually grew into a monastery and then a castle. Both the Park and Palace of Pena denote clear influences from the Manueline and Moorish styles of architecture. Today, this colorful castle lives in a fairytale-looking atmosphere.

We cannot fail to mention the castle located on the peak of the São Jorge hill, one of the most iconic symbols of Lisbon. It is hard to miss its presence when you visit the modern capital city.

Built by the Moors, its fortifications date back over 2,000 years and were restored in the 20th century after a devastating earthquake  in 1755. Nowadays, it is one of the most visited monuments in the country, with the biggest attraction being the breathtaking panoramic views of Lisbon.

As you dart through Portugal chasing castles, luxuriate in the beauty that as inspired our range of unique luxury bedding designs.  Our products are Egyptian Cotton™ certified and personify the best of European quality.

Visit our USA store and Contact us if you’re a retailer.